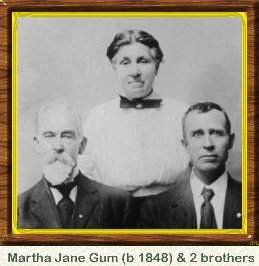 Martha Jane Gum, my great grandmother, must have been a very strong woman. She was her father's thirteenth child of nineteen and her mother's second of seven. She had ten children of her own. She was married five times and she outlived all of her husbands. From the records I have been able to find, she lived, at various times, in five different counties in Missouri, in New Mexico territory, and in California.

Martha's father, Elijah, was born in 1786, in a part of Nelson County, Kentucky which is now Green County, Kentucky. He was the eighth child of his father's first wife. Elijah's father was Jacob Gum 4, a Revolutionary War Soldier, and his mother was Lydia, probably the sister of Oliver Dever. Elijah married Susannah Bruner February 25, 1807 in Green County, Kentucky. They had twelve children and Susanna died about 1845. The next record I have of Elijah is the 1850 Miller County, Missouri Census, where he is living with his wife, Sophia and their three children. Some of his children from his first marriage also moved to Miller County and lived nearby.

Martha's mother, Sophia, was born about 1820 in Tennessee. Her son Elijah told his family her maiden name was Wyrick, but I have not been able to connect her to a family with that name, though many Wyrick families had moved from Tennessee and are listed in and around Miller County, Missouri on the 1840 and 1850 Census.

By 1860, Elijah Gum, then age 66, had moved his growing family south to Benton County, Missouri. When he died the following year 5, he left Sophia, who was 42, with 7 young children to raise on her own. Martha Jane was twelve years old.

Apparently the family moved back to Miller County, because six years later, when Martha was 18 years old, she married Calvin B. Creekmore on Jul 28, 1867 in Miller County, Missouri. According to his Civil War Pension File 6, Calvin was born in Whitley County, Kentucky. On Feb 4, 1865, at the age of 20 years and 9 months, he enlisted as a private in Company B of the 148th Indiana Infantry at Indianapolis, IN for one year. He was mustered out at Nashville, TN on Sep 5, 1865. He had blue eyes, a fair complexion and light hair and was 5'11" tall. He died May 1, 1869 in Barry Co, Missouri. Martha was 21, a widow - and pregnant. Their daughter, Susan Mary Creekmore, was born July 17, 1869. Susan married George A. Barnett in 1885 when she was almost 16. They had one son, Everett, the following year. Susan died September 27, 1888, just two months past her nineteenth birthday.

At the age of 22, on July 9, 1871, Martha Jane Gum Creekmore married Thomas Joseph Archer in Laclede County, Missouri 7. He was the son of William Marion Archer, Senior and Sarah "Sally" Williams Archer. Thomas was born January 10, 1844 in Missouri, and he too, had been a Civil War Soldier. He had enlisted at Lebanon, Laclede County, Missouri on Apr 10, 1863 and was in Captain Ch. Ruby's 6th Regimentt Provisional E.M.M. Volunteers, and was discharged Feb 28, 1864. Martha and Thomas had seven children:

Thomas Archer died March 5, 1885, and once again Martha was left a widow with small children.

Because she had six children under the age of ten and no means of support, the court, as it often did in those days, appointed a guardian for them. Thomas' brother John M. Archer was appointed guardian for the children per Civil War Pension Application # 530,835.

Martha married again that same year at the age of 37. On Oct 31, 1885 she was married by B. G. Williard, Justice of the Peace, Laclede County, Missouri to Isaiah Clifton. Isaiah was the son of Isaiah Clifton and Sophia Canaday Clifton. He was born in Casey County, Kentucky on November 20, 1835, which made him 13 years older than Martha. He was also a widower and had five daughters. Martha and Isaiah had two children together:

Martha J. Clifton filed a homestead claim in New Mexico at the Tucumcari NM Land Office on 12 March 1908 for the E 1/2 of NE 1/4 of Section 18, TWP 6N, Range 27E, New Mexico Prime Meridian. Her oldest son, William Archer, and his family staked a similar claim in October of the same year. Her daughter and son in law, Effie and Pinkney Goodwin, and their young family also tried to make a go of it in New Mexico 10.   All of them later returned to Missouri.

On 24 April 1911, Martha stated that her post office address was Orton, NM, she was 61 years old, was born in MO, she was single (or alternatively, a widow) with no family living with her and that she first established residence on the land on Apr 15, 1908.

In 1911, Isaiah and Martha Jane were divorced for the second time. Martha was still in New Mexico and Isaiah initiated the suit in Missouri. At that time, if a person did not know where his (or her) spouse was, they could place an ad in the newspaper three successive weeks stating that they intended to go to court on a certain date and proceed with a divorce. If the spouse did not show up to protest the divorce, it was likely that the judge would grant the divorce. Although their daughter was keeping house for Isaiah, and was corresponding with her mother, (according to Martha's later statement), Isaiah proceeded as though he did not know where Martha was. Martha was not informed of the suit and therefore, did not appear, so the divorce was granted.

On March 8, 1911, Isaiah married another widow, Mary (Darrow ) Davis. Isaiah died less than a year and a half after this marriage.

No one knows for sure why Martha and Isaiah had such trouble in their relationship, but I have heard stories that he liked to "drink a bit" and that he was a jealous man with a wicked temper. Perhaps that's why she was not found living with him on either the 1900 or the 1910 Census. On the other hand, he was a good looking man and a good provider, and she was not willing to give him up altogether.

The next records I've found of Matha place her in Oronogo, Jasper County, Missouri in August of 1919. I don't know if she sold her homestead in New Mexico or simply left it, but she returned to Missouri not long after receiving her Homestead Patent. Her son William also left New Mexico for Missouri about the same time. She wrote a 12letter to the War Department requesting a pension based on her marriage to her first husband, Calvin B. Creekmore, a Civil War Soldier. Her claim was denied, because she had remarried prior to filing the claim. The same was true for any claim she might have had to a pension based on her marriage to Thomas Archer. And since Isaiah Clifton had remarried after their divorce, his pension went to his widow, and could not be claimed by his ex-wife. It was at that time that Martha replied in correspondence to the War Department that:

"I married Isiah Clifton lived with him as his lawful wife and raised a family. He deserted me in 1896 and after filed a suit for Divorce but with drew the suit when I employed attorney to fight his case. In March 1908 I went to Taiban New Mexico where my son-in-law and daughter had filed on a Homestead, and I also filed on Homested and remained there until fall of 1911. My Husband and Daughter lived together. My daughter Ida Clifton Keeping house for him and we was corresponding with each other all the time. After I returned home to Laclede Co. MO, I heard he had got a divorce. I never had service of suit. And he knew all the time where I was and had my Postoffice address. He knew he had no cause for divorce and I would have attorneys to fight his case if I knew it as he deserted Me without cause on my part."

Unfortunately, this petition went unanswered, and so, although she married three Civil War Veterans, and raised their children, she was, at the last, not entitled under the law of the land, to a widow's pension in her old age.

Martha's younger sister, Julia, married James Riley Wiseman in 1867. They moved to Oregon in 1882, with their seven children. The couple had three more children in Oregon and in 1890, Julia died of influenza. James remarried in 1894, and he and his new wife, Martha Walker England, had four children. After twenty five years of marriage however, the couple divorced. Sometime after this divorce, Martha and James decided to marry and they moved to Butte County, California, where Martha's son, Charles M. Archer was living. (There may have been more of Martha's children living in California.)

I'm not sure when Martha moved back to Missouri, but she spent her final years with her daughter, Sarah "Jennie" Archer Rogers and Jennie's husband W.B.. She died in Strafford, Missouri on January 31, 1940 at the age of 91 years, four months and fifteen days. Services were at Mount Pisgah church. She is buried in Mount Pisgah Cemetery, in Webster County, Missouri.

Return to the Family Documents Index

When someone does something good, Applaud!
You will make two people happy.
--- Samuel Goldwyn